Marchia proves that women can excel in male-dominated world

Marchia Mudau from Tshandama village near Tshilamba has a message of hope for all South African women who still think that certain jobs are meant specifically for men only and that that they can accomplish anything if they set their minds to it.

This tough lady is a qualified civil engineer, but to get where she is today took a lot of sweat and hard work. She started out as a bricklayer’s assistant, pushing wheelbarrows back and forth while mixing mortar. Later she became a bricklayer herself, and did plastering, painting and tiling work until she passed a trade test and became a plumbing artisan.

Currently, Mudau is a licensed plumber, registered with the Plumbing Industry Registration Board (PIRB), and works as a trade testing officer for plumbing at Ndlovu Medical Trust Vocational College in Groblersdal. This job entails inspecting plumbing work in domestic and commercial environments and the issuing of certificates of compliance (COC).

Mudau believes that women can excel and succeed in male-dominated work settings too. “Many women intimidate themselves because they believe that they are the weaker sex,” she says. Mudau explains that the old beliefs that men should work while women remained at home were outdated. “The Constitution guarantees our equality with men, and as women we should prove to ourselves that we also have the capacity to contribute to the economic development of our country.”

She encourages women with skills to empower young, unemployed youths, so that they can create jobs for themselves. “Through my company, Tivilla Projects, I am accredited to train students in skills such as bricklaying, painting, plumbing, tiling, carpentry and plastering. This I do at no cost to these youths because most of them are the poorest of the poor, whose parents cannot afford to pay for their children’s skills development. If we all plough back into the community without expecting anything in return, South Africa will be a better place for everyone,” she says.

A former presenter of Phalaphala FM’s Denzhe Show (a children’s programme), Mudau also does voice-overs for adverts on national and regional radio stations when she has the time. She is also a passionate writer who plans on publishing her first book later this year. 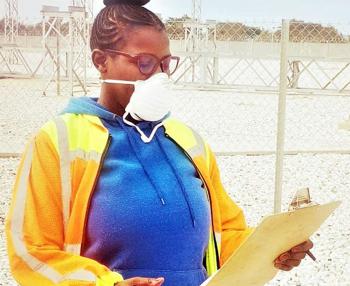 Marchia Mudau believes that women can also succeed and excel in a male-dominated workplace. Photo supplied.