There's no such thing as a dirty job, says Manyaga

Washing other people’s dirty sneakers with one’s bare hands, a bar of soap and a bucket of water is not exactly a job many would consider something to be proud of, but in these tough economic times one does what one must to keep the pot cooking. This is what Rilinde Manyaga (25) of Mbilwi, near Sibasa does for a living, and he does not care what people think of him. At least, he says, he earns an honest living.

To Manyaga, a “dirty job” does not exist, as long as one does something that generates “clean” money. “Some people, especially the youth, are very ashamed to do this type of work because they believe that people will look down on them. There is nothing more fulfilling than leading an honest life and earning honest money. It is our responsibility as young people to get up and come up with plans to sustain ourselves, instead of waiting for government’s handouts,” he said.

The young man, who is currently upgrading his Grade 12, first saw his opportunity in June last year when he visited some of his friends and noticed their dirty sneakers lying around their homes because they were too lazy to wash them. “I asked three of my friends to give me their sneakers, and washed them for free. Some of those sneakers were so dirty that it seemed impossible to get them clean again, but I scrubbed away and, by the time I returned them to my friends, they looked as good as new. I then started circulating on social media that I can clean sneakers, and that is how it all began. People started calling me.”

Manyanga has managed to acquire a driver’s license and obtain a security training certificate with the money he makes. He now has clients from around Thohoyandou, Ngovhela, Phiphidi, Maniini, Maungani and the surrounding areas. He charges R40 per pair of sneakers, which enables him to take public transport to collect and deliver to his clients.

“When I need something, I don’t have to beg from someone, because I always have cash to sustain myself. We are the masters of our own destiny, and we must wake up and create jobs for ourselves. It is my wish that unemployed young people everywhere start to change their perspective and become independent.” 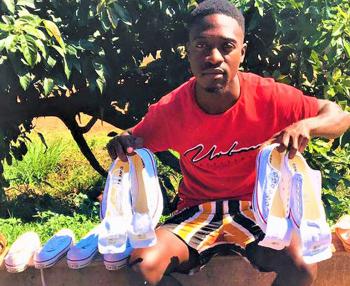