“We will remember them”

On Sunday, 10 November, tribute was paid to those who had made the ultimate sacrifice in service of their country as part of Armistice Day, also called Remembrance Day.

At 05:00 on Monday, 11 November 1918, a document was signed that brought an end to the First World War. At the 11th hour of the 11th day of the 11th month of that year, the guns fell silent. The war that was supposed to end all wars had come to an end, but not before an estimated nine million people had lost their lives. Each year, on the Sunday closest to 11 November, this historic ending of the war is remembered.

“They shall wait upon you, Lord, and shall renew their strengths, they shall mount up with wings of eagles, they shall run and not be weary and they shall walk and not faint. They shall grow not old as we are left to grow old, age shall not weary them, nor the years condemn, at the going down of the sun and in the morning, we will remember them…” reads an extract of the prayer of the Memorable Order of Tin Hats (Moths) delivered during the event. 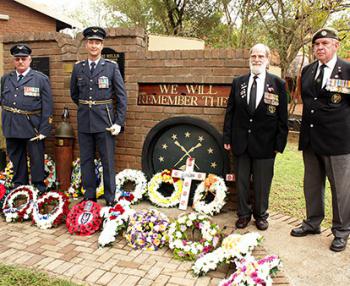 Tribute was paid once more to those who had made the ultimate sacrifice in the service of their country as part of Armistice Day, also called Remembrance Day, on Sunday. The Memorable Order of Tin Hats (MOTH) of Louis Trichardt’s Turbi Hills Shellhole again played hosts to the event on Sunday, with numerous special guests attending the memorial service and laying wreaths. Amongst the special guests were (from left to right) Warrant Officer Class 1 Gavin Bell (squadron sergeant major of 85 Combat Flying School), Lieutenant Colonel Craig Leeson (officer commanding of 85 Combat Flying School), Turbi Hills Shellhole Old Bill Ben Wolff and Col (police retired) Gert Nel (on behalf of Koevoet).

Moth Servaas Wahl gets ready to hoist the Moth flag as part of Remembrance Day at the Turbi Hills Shellhole in Louis Trichardt the past weekend.