New roof for home of single mother of three

An unemployed single mother of three children, whose six-room house caught fire some weeks ago, forcing her and her family to stay with relatives, has reason to be thankful. The Live Foundation run by a well-known businessman in Louis Trichardt, Cedrick Marageni, is rebuilding her damaged roof.

Ms Julia Nnditsheni Ndou (45), of Ha-Mangilasi village in the Vuwani area, said she believed that God had answered her prayers after Limpopo Mirror had run a story and a good Samaritan then decided to help her and her family.

According to Ndou, she was alone when she discovered that her bedroom was on fire. She cannot explain the origin of the fire and what had caused it, and said she was devastated about the situation.

“I was surprised when I got a call from Marageni, who said he wanted to fix my damaged roof. I am happy that my house is being refurbished, and I will be able to stay in a decent house, better than it was before,” Ndou said.

Ndou said that she had also received clothes and school uniforms, which meant her children could go to school with full uniforms and shoes like the other learners.

Mr Cedrick Marageni of the Live Foundation said he saw the article in the newspaper about the sad news of the family whose house’s roof had caught fire. “ …it was heart breaking, and I decided to help the family rebuild the roof. We used to donate food parcels to the needy and poor people and build houses for destitute families without shelter over their heads. Now, we want the house to be complete rebuilt, putting in new beds and blankets, amongst other things,” said Marageni. 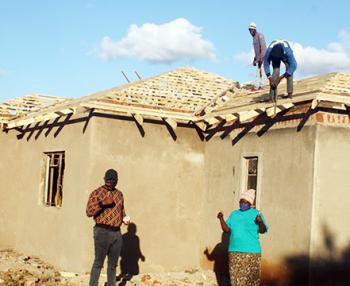 A well-known businessman in Louis Trichardt and philantrophist, Mr Ernest Marageni (left) and Ms Julia Ndou (righ) show the thumbs up to mark the rebuilding of her damaged house and its roof at Ha-Mangilasi.