A group of young men from Madodonga have decided to not stand by idly and watch how the roads are killing people. The volunteers realised that something must be done, so they are now filling the potholes themselves, using elementary tools and whatever material they can find.

Israel Majesty Ramambila, who acts as convener for the volunteers, explains that they witnessed how the roads in the area started deteriorating. The roads are also creating a dangerous environment, with drivers having to constantly swerve to avoid potholes.

Instead of just ignoring the problem and criticising the government, the young men formed work teams. They go out every day, armed with a wheelbarrow, a pick, and spades, and fill the potholes.

They rely on the expertise and experience of some members, such as Netshedzo Mutulana, who finished a learnership on road construction last year. Mutulana opted not to sit around and wait for a job opportunity to arise but to use his skills and do something for the community. Ramambila also has some construction experience, working for Star of Life Road Maintenance from 2016 to 2018.

Ramambila says that the work they are doing seems to be appreciated by motorists, who are giving them a thumbs-up. The taxi drivers are especially thankful. The local municipality, however, has not acknowledged the work that they had been doing.

Trying to maintain infrastructure without proper equipment and material is not easy, however. Where possible, they fill up the holes with gravel and try and compact these. This is not always possible and then they have to use whatever soil is available.

The team members also do not have protective clothing, which would make them more visible to motorists and make their job safer. “We are trying to adhere to health and safety regulations, but it is difficult without funding,” says Ramambila. 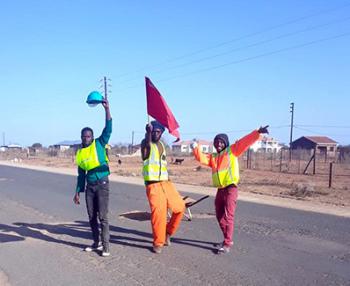