Players walk off the field in MMK league match

The Safa Vhembe MMK League match between Makhitha Oscar Stars and Magau United at the Makhitha grounds on Sunday was not played to the finish.

The game was evenly contested, and signs of rivalry were evident from the start. United missed numerous chances in the opening minutes, while Stars dictated terms in the middle of the park. The only player who was cautioned with a card was Faranani Nevhulamba.

In the 89th minute, Faith Ratombo of Stars scored, but the players and fans of United protested, saying that the ball had not crossed the goal line and that the ball had been cleared by one of their defenders. They accused the referee, Mr Mulalo Mubva, that he was robbing them.

The players of United argued that the referee had blown the whistle as an indication that they had scored a goal although the ball had not crossed the goal line. The argument continued, with United maintaining that they would not continue with the game unless the referee reversed his decision.

After a heated debate with the teams’ officials and the captains, Mubva and his assistant referees decided to leave the pitch. The referee, Mr Mubva, say it would be impossible for him to continue with the game for safety reasons.

Both the clubs and the match officials were still to submit their match reports to the league at the time of our going to press. 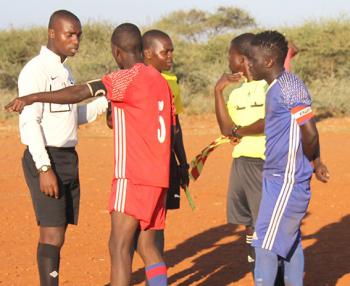 The captains and match officials photographed during the argument.