Tshakhuma Tsha Madzivhandila (TTM) enhanced their chances for promotion by humiliating TS Sporting 3-0 in their NFD League match at the Thohoyandou Stadium on Saturday.

TTM, or Vhadau Vha Damani, moved from the fifth to the fourth position on the log standings after their convincing victory.

With only two matches remaining before the end of the programme for the current season, TTM have 47 points in their league account, three behind the pace setters, Royal Eagles. Should they manage to collect the maximum points against Jomo Cosmos at the Vosloorus Stadium on Sunday, TTM will be almost sure of a place in the promotional playoffs.

The fact that Jomo Cosmos are fighting for survival is reason enough for TTM not to expect a walk in the park on Sunday. Cosmos, or Ezenkosi, are currently lying in the third-last position on the log with 31 points, one ahead of Real Kings.

The last two teams on the log standings will be relegated to the lower division at the end of the season. Witbank Spurs need a miracle to escape relegation. They are languishing at the bottom of the log with 21 points, nine behind the second-last side, Real Kings.

The teams that are on course for promotion are Royal Eagles, Ajax Cape Town, Stellenbosch FC, TTM and Mbombela United.

Phumelela “Ace” Bhengu scored the opening goal for TTM against TS Sporting, while the second and third came via Nhlanhla Mgaga and Thembisani Nevhulamba respectively. 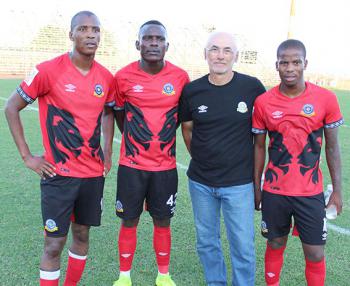