The MJN Foundation gave awards to 50 sports personalities and media practitioners during its launch at the Mack Funzani Hall at Benny’s Care a fortnight ago.

According to a spokesman for the foundation, Mr Leonard Mavhandu, they focus on education, sports, arts and culture and media upliftment. He said that the foundation would hold empowering workshop for media personalities, provide support for community-based activities and do mentorship programmes in education.

“We will encourage pupils to take education seriously by hosting career-guidance exhibitions and helping pupils who will pass Grade 12 with registration fees.” He added that they wanted to encourage the youth to study further. “Education is the only key for prosperity, and we need to strive hard to educate our nation.”

Mr Kaizer Marindi, the managing director of the Marindi Funeral Scheme and the sponsors of the event, said that his company was happy to be able to contribute towards the development of sport and education in the rural areas.

Mr George Kubayi congratulated the MJN Foundation members and advised them to start by focusing on the rural areas first. He said the launching of the foundation clearly showed “that the doors of learning are wide open to all”. He said the Vhembe region´s people were very grateful for the sponsorship of the event. He pointed out that sport was the most effective way to draw the youth away from gangsterism, drugs and alcohol abuse.

Vhavenda Vho-King Sinthumule said that he was happy as the traditional representative of the newly formed foundation, which is going to uplift the development in the community. “This shows that the community of Tshiozwi and Sinthumule area is striving towards the upliftment of their lives. Although it is no longer a secret that much has already been done, you must not sit and relax because you still have many challenges to overcome. Only unity and hard work will build you to become a strong and prosperous nation,” said Sinthumule. 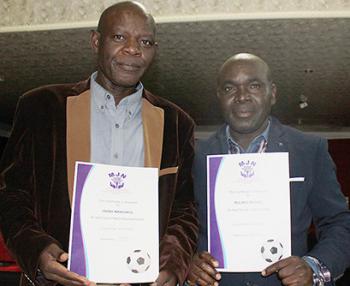