A bright light is shining at the end of the tunnel for two young soccer stars from Tshiozwi and their coach after the soccer players underwent trials and the coach received professional coaching lessons.

Luvhengo Negota (16) and Tshililo Tshidada (16), who were selected during Mamu's tournament when they were playing in their home-based team, Gwasda United FC, played in the trials at the Bidvest Wits Football Academy in Johannesburg, courtesy of Mamu Community Development.

“They amazed the academy's top coach and the team with a sterling performance,” said Mamu's general secretary, Mr Jafter Mamugudubi. “They are impressed with the boys' skills, such as strength, fitness and fastness adjustments. But then they lacked the skills for controlling the ball, and so they will have to go back again for trials during the school recess.”

However, their coach, Vhutshilo “Gwasda” Nedzamba, received the lessons and coaching manuals on how to develop and prepare the two boys better for the next round of trials. “I am already busy coaching Luvhengo and Tshililo in line with the manuals provided to me,” he said.

Mamugudubi added that the organisation was grateful for the support they had received from Hollywoodbets, Ukwakhana Electrical Services, Mikasa, Phadziri & Son Bus Service, Phadziri Coaches, and Premjee & Son Cash and Carry.

“As Mamu we would like to make sure that we give all our support to Gwasda United FC with football materials and other technical support, so that they meet the professional football level needed by the academy,” Mamugudubi said. “We want to make it easy for Tshililo and Luvhengo.” 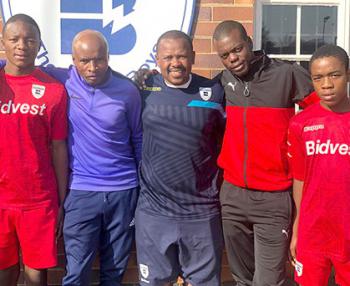