Madridtas too strong for Rising Stars

Not only did Madridtas FC secure a place in the next round of the King Abraham Pre-Season KO competition, they also taught Matangari Rising Stars a soccer lesson when they brutally walloped them 5-1 at the Sambandou grounds on Sunday.

Stars approached the game with self-confidence, creating some promising moves from behind. Their fighting spirit, however, faded with time.

Madridtas gained momentum and started to press hard in search of early goals. Their efforts did not pass without reward as they managed to open their account in the 18th minute. Their diminutive striker, Sipho Masia, headed home after a scramble within the box.

Sharlen Munyamela, the Madridtas centre back, was the first player to be booked. He tackled Ishmael Khomola the rough way and the referee did not think twice before flashing yellow.

Madridtas increased the lead in the 24th minute. Gift Nemutandani received a neat pass from Edward Mabasa and beat the keeper with a long-range half volley.

Rising Stars committed suicide by allowing their vastly experienced midfielder, Avhatakali “Tuis” Tshivhase, to play until the end of the first half. Tshivhase, who was reprimanded with a card in the 26th minute, was down and out from the onset.

Madridtas scored their third goal via Edward Mabasa. He beat the keeper with a header after a free kick by Sipho Masia. Rising Stars were trailing 0-4 when the teams adjourned for half time as Wanga Khorommbi was on target three minutes before the break. He beat the offside trap before sending the keeper the wrong way.

A substitute, Vhulahani Gavhi, scored the Stars' solitary goal with a fine header nine minutes into the last half. The goal seemed to be an insult to Madridtas. They scored their fifth moments thereafter through Edward Mabasa. He basted in a rocket from inside the box. 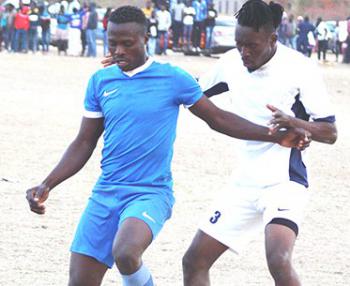