United Artists will not take part in the last-16 stage of the King Abraham Pre-Season KO competition. They were booted out of the competition by Muledzhi Fire Boys, who crushed them 5-2 in their opening match at the Sambandou grounds on Sunday.

The youthful Fire Boys showed no respect for their elder brothers. They created some defence-splitting moves from behind in the first 10 minutes of the game.

That forced United Artists to move backwards as part of their many ways to mitigate the damage. A defender of Artists handled the ball within his own penalty box in the ninth minute. That prompted the referee, Mr Calvin Nemavhola, to award a penalty in favour of Fire Boys. Rendani Naledzani beat the keeper to give his side an early 1-0 lead.

United Artists stopped pressing the panic button and started to play their normal entertaining football. Before long their efforts yielded some fruit. They were awarded a free kick in the 35-meter area. Robert “Berea” Baloyi beat the keeper with a half volley from the free kick.

The Fire Boys’ goal scorer, Rendani Naledzani, was the first player to go into the referee’s book. He tackled Gift Nemutandani the rough way and the referee gave him a verbal warning. Instead of apologizing, Naledzani opted to protest the referee’s decision. That prompted Nemavhola to flash yellow.

Eethe Khaukanani, the Artists' killer striker, could not live up to the fans’ expectations as Nyelisani Makuya was tasked to render him ineffective. Although Khaukanani was more of a spectator, the technical staff allowed him to play until the end of the game. The score line remained unchanged until the end of the regulation time and the winner was determined through a penalty shootout. 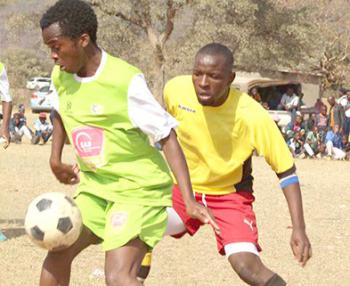 Idani Mutshelwa of Fire Boys controls the ball while Robert Baloyi of Artists is on his heels.