Tshakhuma Tsha Madzivhandila (TTM) continued to drop league points after a goalless draw against Richards Bay FC in their GladAfrica Championship League match at the Thohoyandou Stadium on Sunday.

The absence of the TTM’s forwards, Thembisani Nevhulamba and Phumelele Bhengu, was evident from the onset. The duo watched the game from the grandstand because of ill health.

Wonderboy Makhubu, who was expected to form a good combination with Naeem Amoojee at the forefront, was down and out. Amoojee, who was nominated the Man of the Match, was forced to collect the balls from the middle of the park, while at the same time playing as a full striker.

After only 14 minutes, TTM realized that it was not their day. Their dribbling wizard, Onyedikachi Ononogbu, forced his way through the Bay’s defence and dished a pre-cooked pass to Wonderboy Makhubu, who was waiting inside the penalty box. Instead of chipping the ball, Makhubu caused an upset by unleashing aimlessly. The ball went astray, much to the fans’ disappointment.

Simon Mamudzidi, the TTM keeper, made his presence felt in the 34th minute. Sandile Kubeka, the Bay’s fast forward, beat Enort Dzaga, the TTM right back, with pace and tried his luck with a half volley from close range. Mamudzidi braved the shot and palmed the ball away for a corner kick.

TTM effected three changes to their starting line-up in the last half. Dzaga, Ononogbu and Motlomelo Mkwanazi were replaced with Lucky Khumalo, Ivan Mokoena and Lucios Ndou respectively. Wonderboy Makhubu went loose in the 78th minute and shot far wide. TTM played the last 10 minutes of the game with 10 men. Naeem Amoojee was taken off the pitch on a stretcher and they could not replace him as they had already used their substitution chances at that stage.

Amoojee, the Man of the Match, was presented with a cheque of R3 000 after the game. TTM are now in the sixth position on the log with 9 points after the draw. 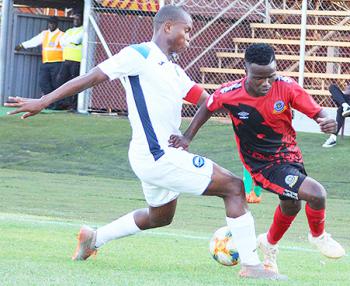 Mboniseni Mbandlwa of TTM (right) and Simphiwe Mcineka of Richards Bay wrestle to win the ball.