That Zingange would retain the title was evident right from the start as Mangxilana was nothing better than his punching bag for the better part of the fight.

The referee, Mr Jaap van Niewenhuizen, was forced to stop the fight after one minute and 34 seconds into the eighth round. This after Mangxilana failed to respond to the referee’s call to get up after the countdown. The bout was scheduled over 12 rounds.

Speaking to a contingent of journalists after the fight, Zingange said that he was expecting much more than what he got from Mangxilana after looking at his track record. He advised Mangxilana to think twice before taking a decision to challenge him again. He stressed the fact that chances were high for Mangxilana to leave the boxing ring in a body bag if he came back unprepared as was the case last Friday.

The main supporting bout was a junior-lightweight fight between Rofhiwa Maemu and Koos Sibiya. Sibiya is from Mpumalanga while Maemu is from a local stable. The fight was a thriller from the onset, with the boxers exchanging blows at a see-saw pace. The bout was declared a draw.

Bockson Bukasa from the Democratic Republic of Congo was too strong for Karabo Mokupi in their middleweight bout that was scheduled over eight rounds. The referee, Mr Alfred Mamidze, stopped it in the sixth round. This after Mokupi failed to get up and continue with the fight after falling.

Deon Mbubana from Tshitomboni village outside Thohoyandou could not match his opponent, Saul Hlungwane, in their junior-featherweight bout that was fought over eight rounds. Mbubana was already bleeding profusely from his left eye at the end of the first round, making it difficult for him to absorb the pressure from Hlungwani in the remaining rounds. Hlungwani won the fight on points.

Donjuan van Heerden beat Ntsako Miyambo with a knockout in the third round, while Akani Sambo was too strong for Jansen Mudzanani when he beat him on points in their catchweight bout over four rounds. 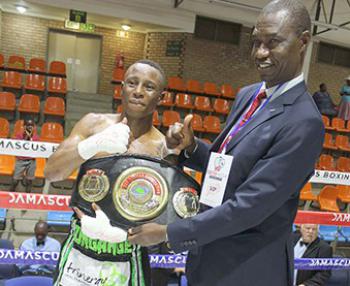 The mayor of the Collins Chabane Local Municipality, Cllr Moses Maluleke, hands over the championship belt to the champ, Sibusiso Zingange.