Kungfu master and his sempais bring karate to locals

Residents of Mavhunga RDP section might have the skills to fend of criminals – and they would employ Kungfu as a defence mechanism!

This comes after the Nzhelele Kungfu Club had volunteered to offer Kungfu lessons to the youths and any other interested residents.

The club had started negotiations with the local community leadership for permission to train the youths as a way of social upliftment in that area. The club consists of Christopher Majola (master), Sipho Majola (sempai or teacher) and Jerry Khumalo (sempai).

“We need to remove the youth from the streets by keeping them busy with martial arts,” said Christopher Majola. “Martial art is a practice that endows one with a sense of discipline and the skills to defend oneself. Some youths whom we are going to teach Kungfu to might use it to earn a living as they might join national competitions and excel there.”

A group of youths and adults were standing around the three martial arts experts who demonstrated their skills, to the delight of onlookers. “We'll give you all the best of training and ensure that you master the basics of Kungfu,” Majola said. “From then we go to the most advanced and complex stages of Kungfu.”

Resident and mother to three children aged 17, 13 and 5 Ms Lindeni Khumalo said that they welcomed the Nzhelele Kungfu Club to train them and their children in martial arts.

“We want them to start as soon as they are done with negotiations with the local leadership,” she said. “We are tired of criminals who terrorise us here. Now, once we have acquired Kungfu skills, we will fight for ourselves. We will defend ourselves. We'll now live in a crime-free community because no form of force used against us by criminals will succeed.”

Majola and sempai Jerry Khumalo met at Patrick Ramaano Secondary School in the 1990s, where they were first introduced to martial arts, and from that time they had never looked back. “We have been together ever since that time,” said sempai Khumalo. “Majola is my master; he taught me everything – I take orders and instructions from him.”

Nzhelele Kungfu Club's challenges include lack of proper karate attire and a training venue. They can be reached on 076 281 4868. 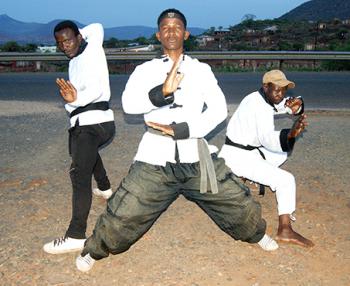