TTM fine with draw away from home

Tshakhuma Tsha Madzivhandila (TTM) may have failed to collect the maximum points in their DStv Premiership League match against Chippa United at the Nelson Mandela Bay Stadium in Port Elizabeth last Sunday, but the team’s head coach, Mr Joel “The Prophet” Masutha, is happy with the results. Vhadau Vha Damani held Chippa United to a 1-1 draw.

During an interview with him after the game, the former Black Leopards mentor said that the fact that they had managed to grab a significant point away from home was a good reason for them to celebrate. He further stated that an away point was as good as gold to them. He stressed the fact that the team would go places if they continued to collect at least a point away and strived to win the majority of their home matches.

Mr Masutha again stated that he was delighted to see that his team had managed to hold off a strong Chippa United attack, despite the fact that they had played the last 30 minutes of the game with their hands tied behind their backs. The Tshakhuma side lost their playmaker, Meshack Maphangule, in the 60th minute. Maphangule saw red for a second bookable offence. At that stage, the score was 1-1.

Thabo Rakhale had scored TTM’s all important goal earlier in the last half, following a mix-up within the box. TTM managed to match the side pound for pound for the remaining part of the game, despite all the odds.

Vhadau Vha Damani moved a step up on the log standings after this result. They are now lying in the ninth position with six points accumulated from the five matches they have played so far. They won one, shared the spoils on three occasions and lost one.

TTM’s next fixture will be against Amazulu FC at the Thohoyandou Stadium tomorrow evening (Saturday). 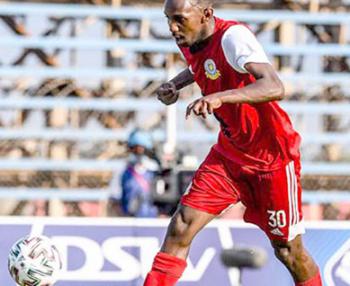