Makhadzi wins yet another award

As if releasing a new album a fortnight ago were not enough to please her thousands of fans, Makhadzi scooped up a prestigious music award over the weekend.

A 21-year-old popular singer from Ha-Mashamba, Makhadzi was named winner of the best Tshivenda hit with her song Yo Shoma during the Limpopo Music Awards ceremony held at Meropa Casino Hotel.

“This award gives me hope yet again to continue dishing the best of songs as a singer who also gets support and love from many people who love my music,” Makhadzi said. “I thank the people who voted for me. I love you all, my fans.”

So far, she has won numerous awards and travelled to several countries because of the quality music she sings.

The manager at Rita Dee Entertainment, Rita Dee, said that the award further solidified Makhadzi as a singer whose music touched thousands of families and youths in South Africa and beyond. “She deserves this award and we are happy for her,” Rita Dee said. “It only symbolises her hard work and dedication to the craft.”

Makhadzi's latest album, Shumela Venda, is now available from good music stores such as Dakota and Cash Crusaders, and online on iTunes. 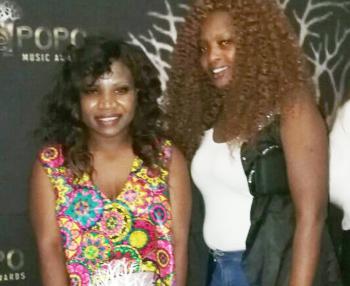 Makhadzi (with her manager Rita Dee) won yet another award for her song entitled Yo Shoma.