Millicent aims to write a different story with her voice

Over the past two decades, female rappers have come and vanished without a trace in the music industry. The young Millicent Makhanani Rikhotso wants to change this, hoping to write a different story with her voice.

“I want to remain in the industry as an active rapper for as long as my voice still carries my verses,” Millicent said. “My mother tells me that I started composing my own songs when I was only two years of age – is that not amazing enough to note that, so far, I have been in the industry for more than a decade?”

She has just returned from the Limpopo Music Awards ceremony that was held at Meropa Sun a fortnight ago, where she stunned music lovers with her sharp lyrics and active voice of a real female rapper reminiscent of rappers from the Ghetto.

“I won a Best Xitsonga House Award for my song TamatiSoso during the Xitsonga Music Awards 2019, and I felt happy about winning it,” she said.

Millicent is a multilingual rapper who belts out her verses in XiTsonga, Tshivenda, Khelobedu and English. She has released many songs that have earned her respect from many people, such as TamatiSoso (ft Dj Gami), Eka Manana (ft Loveness), Famba Pota, Ama 2000, and A hi busy hiwena (ft Boti Majuli & Chimmy).

“Music is a strong voice, it can be used to heal and also express a wide range of views and feelings,” she said. “It’s always good to tackle crime with a good message of hope, using music as a weapon, and that’s exactly what I also do.”

She is currently working on her next single with the award-winning deejay and producer, DJ Gami. Millicent resides at Zava village (Nwamarhanga), Giyani. 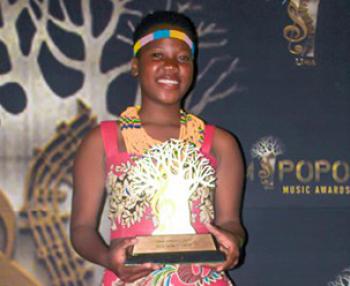 Millicent Makhanani Rikhotso promises to stand the test of the time in the music industry. Photo: LazmaTheCrowns.