Lockdown Riddim is the brainchild of seasoned reggae artists Steve Netshishivhe and Lufuno Munzhelele. Dombo’s Lockdown Alert song was recorded at MB Records in Thohoyandou and it was released last week.

Also known as Natty King Elijah or The Lion Poet in the reggae music fraternity, Dombo said he felt very humbled to contribute to the growth of the South African music industry thorough his musical talent. “I have always longed for a chance to be part of the bigger family in the South African reggae music industry. I am happy that my dream is now a reality and I will be able to show music lovers what I am capable of.”

To some people, his name might sound unfamiliar, but among his fans, he is a force to be reckoned with in the reggae music fraternity. He has travelled a long musical journey to be where he is today.  He was born in 1992 at Tshivhazwaulu Ha-Mangilasi, Ha-Nesengani outside Vuwani. His father died when he was only six years old and he was raised by his mother. He started school at Rasivhetshele Primary School in Tshivhazwaulu Ha-Mangilasi and completed his Grade 12 at Tshipakoni Secondary School.

He started writing poems in 2006. The love of music grew stronger and he started doing vocals and instruments in 2010, thanks to his late teacher, Mr Tom Maladzhi, who gave free music lessons to young people at that time.

He added this about his long journey to success: “Through my contact with Mr Maladzhi, I met Ndivhuwo T-Jah Tuwani in 2015, and we began to work together and dropped a song, Ndi Tshila Na Marasta. In 2016, I met Kevin Stallion Stali and Mulalo Briscoman Mukwevho and we dropped another single, Lufuno Lwa Vhukuma. That is where me and my friend, Ndivhuwo Kingman Mulugisi Mamafha, formed the band The Natty Lions.

“In the band I feature as poet, songwriter, backing vocalist and producer. Although I am a member of the band, at times I go solo and release music under my stage name, Natty King Elijah.”

He said their first output as Natty Lions came in 2017, with the release of the album Jah Rastafarah, followed by another one, entitled Legalize it, in 2018. “We are doing very well as a band and we have already won an award. The Natty Lions won the Best Reggae Song Award at the sixth annual South African Upcoming Music Awards (SAUMA) at a gala ceremony held on 04 May 2019 at the Market Theatre in Johannesburg. The awards, organised by Huvera Entertainment, are aimed at recognizing excellence in the music industry for upcoming musicians and artists.” 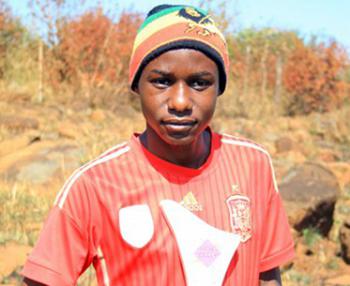 Ndanduleni Elijah Dombo, photographed with the 2019 SAUMA award won by his band, The Natty Lions.