Vhulenda Samuel Mahwasane is a popular local young hip-hop artist with an impressive fan base.

Meek Enk, as he is known to his followers, fell in love with music at a very young age, as he was always surrounded by good music - be it at home or in taxis to Thohoyandou. He hails from Muledane village.

“I started writing my own songs when I was only 13, and I caught the attention of Murendeni Rambau, who saw me performing one of the songs I wrote myself,” he said. “He told me to take my gift seriously. I immediately started looking for a recording studio and found Creative Records, who instantly recorded my first track, titled All Night.”

Meek Enk started a music fellowship with like-minded artists such as Yang Base, Young Kay, Early Kid, Lil B and Small Kid, whose purpose was to nourish one another’s talents and skills through underground performances. “That partnership helped us all grow as artists as we freely criticized one another constructively,” he said. “I always look back to those days and smile with contentment.”

At one stage he met multi-talented artist Transformer, who formerly helped manage Mty’e Rec, and encouraged him (Transformer) to join the recording studio where he (Meek Enk) released songs such as Tshisole 1-3, My Name, Nne Mune, and Demon.

“I met many people in the music industry with whom I’d worked, and at some stage our paths separated again,” he said. “But don’t ask me why we separated, for that’s just part of growth – you don’t mature if you stay in one place all the time. You have got to spread your wings.”

This young artist’s desire is to use his popularity to bring positive change into other young people’s lives. He believes that, as much as they like to listen to his music, they are likely to listen to him too if he were to speak with them directly. “I don’t claim to be a motivational speaker, but I feel that I am the right person to encourage my fellow youths,” he said. 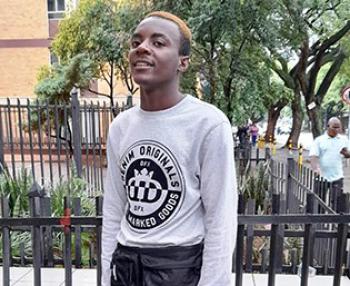