Willemina Mamoraka Gwambe (28) is a very talented local artist from Tshilamba in the Mutale area who has a unique way of addressing social issues and expressing her innermost feelings.

“You see a piece of art and it strikes you; it speaks directly to you,” she said. “I’ve always been an artist at heart, since I was young. When I was still in school, I couldn’t afford to buy my mother gifts or cards for Mothers’ Day. Instead, I would find some blank paper and design my own cards.”

Willemina, who resides at Tshilamba in the Mutale area, lost her mother when she was in the 12th grade. “That was a tragedy, as I was busy writing my final exams,” she said. “My sister also passed away shortly after, and I was devastated. I wanted to express my innermost feelings and find a way to deal with the deaths of my loved ones. Art seemed to be the only means to do it.”

She started preserving the memories she had of her mother and sister through her paintings. “I felt that I didn't have enough pictures of them, and the only way to preserve their memories was to seriously learn how to draw.”

Willemina, who graduated from the University of Pretoria and works as a social worker, said that she learnt a lot about drawing techniques from the Internet. “While I was studying, I had access to the Internet, and with the help of YouTube tutorials, I began the process of learning more about art,” she said.

One day she accidentally smeared her dress with mud. “At that very moment it hit me that I had actually found the perfect medium to paint with – mud!” she said. Today she specialises in ‘mud drawing and painting’, but she is constantly experimenting with other kinds of mediums as well.

Willemina said that she would not trade her love of art for anything in the world. “My artwork completes me,” she said. “I have hopes of one day opening a non-profit organisation, preferably here in the Vhembe District, to bring artistic activities closer to our children.”

Willemina can be reached on Tel 63 727 7939, or at willeminagwambe@gmail.com. She is also available on Facebook. 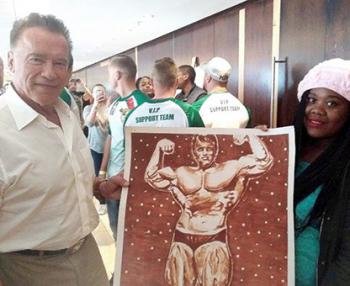