Mashamba brings 'bioscope' to the people

On 16 June 2017, Humbulani Brian Mashamba had ample reason to be depressed. His dream of bringing the latest movies to local people on a massive outdoor screen seemed to have been shattered. Only one person arrived for that first night’s screening session.

“After all the marketing, printing of flyers, radio interviews and massive advertising, only one person came. I got very discouraged and thought I've made a very bad decision by attempting this,” he says.

Humbulani’s dream was to revive the old-fashioned “bioscope” idea. He formed a company called Movie Mania and invested in a huge inflatable screen and sound equipment. In his mind, he could see hundreds of people picnicking on blankets underneath the starlit skies, thoroughly enjoying the movie.

But as is so often the case with entrepreneurial ideas, selling a concept takes time. “I then sat down and did a lot more research,” he says. He was convinced that the concept would work but realised that he would have to adapt it and be patient.

Humbulani, who hails from Matsila village not far from Elim, shifted his attention to the shopping malls spread all over Limpopo, hoping that the people in charge would share his vision. “Many turned me down, while others were clueless of what I was talking about,” he says. Then, in September 2017, he received the nod from the manager at Tibane Shopping Mall, some 60 km northwest of Polokwane. “It was amazing to witness such a response and to see how hungry people were for such experiences,” he says.

From then on, things started to change for Humbulani. He realised that one must also involve other businesses, each catering for a specific need. “During the movie night, we offer opportunities where one is able to book a stall and sell for example popcorns and drinks. We have teamed up with companies such as D-Events and Promotions, who take care of the organising and marketing of the entire event,” he explains. Another company takes care of the cleaning of the site after each event.

Just when things were picking up nicely and the business got going, Covid-19 struck. “This was a very big setback, but somehow it also worked to my advantage,” Humbulani says. Once the strict lockdown regulations were lifted, people started showing more interest in being outdoors and socialising. “It was an opportunity for people to enjoy a good movie outside the artificial environment of the theatre,” he says.

Humbulani also realised that one must be adaptive in business, not relying on a single business model. “You can always entertain more community members, family, or friends with an outdoor movie screen than you can with an indoor theatre system,” he says. This also meant that he had to invest in different screen sizes. “Our screens range from 9 to 40 feet in width, so it doesn't matter if you're looking to screen a movie with your family of five or if it’s a couple of hundred guests, we have an outdoor movie screen for the occasion,” he explains.

The endeavour is also about more than running a business and making a profit. Humbulani has a soft spot for disadvantaged rural communities and often presents movie nights at such locations without charging. He took his Movie Mania nights to areas such as Ha-Mashamba, Waterval and Masingita Crossing at Malamulele.

The dynamic entrepreneur’s efforts have not gone unnoticed. This year he was nominated for a Founder of the Year Award (FOYA) in the 30-year-old-plus category. FOYA is designed to recognise and appreciate young founders who are contributing to the African continent's economic growth. The winners will be announced later this year during a prestigious function in Kenya. 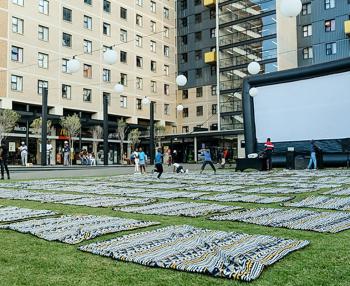 One of Humbulani's big screens, with the blankets already set out where people can picnic and watch the movie. Photo supplied.