Mbuelo on the way to fame

Achievement and possibly fame await 22-year-old Mbuelo Vannesa Mukwevho after she was chosen as a semi-finalist in the Empress South Africa 2019 pageant. This came after she had joined the beauty pageant earlier this year.

She stated that Empress South Africa was a contest using the beauty-with-brains-and-purpose platform to empower young women to grow and develop themselves by making a positive impact in their communities.

“I am very happy with my achievement so far, and my eyes are currently on the crown,” she said. “The contest has many contributors to its brilliance and ingenuity and there is a large creative team behind the success of Empress South Africa. As a contestant, I have become one of many stars in the semi-finalist group.”

“I have always wanted to do modelling because it is something that I have loved when I was still young,” she said. “I became a model when I was still at primary school, but I stopped in Grade 9 because of a lack of exposure and modelling opportunities.”

A resident of Tshikwarani village in the Kutama area, she is currently doing a bachelor’s degree in public administration at the Braamfontein Campus of the Rosebank College.

She also available on Facebook as Mbuelo Mukwevho Empress South Africa 2019 Semi-finalist-Limpopo. The pageant will take place on 16 December. 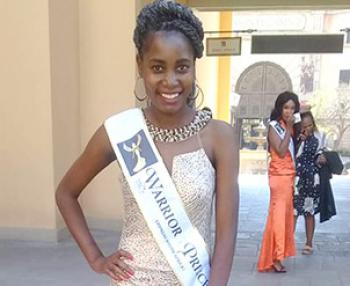 Mbuelo Vannesa Mukwevho is on the way to both achievement and fame after she was chosen as a semi-finalist in the Empress South Africa 2019 pageant. Photo supplied.