Another Vuwani house burns down

Barely a month after the six-room house of a single mother of three children at Ha-Mangilasi in the Vuwani area caught fire, forcing her and the children to sleep with the relatives, another four-room house at Ha-Ramukhuba-Tshifhefhe village also caught fire.

Now, Mr Edward Maluta Munyai (58) and his girlfriend are forced to sleep in an unsafe old car while his younger brother and wife are now staying with relatives.

Munyai said at about 23:00 last Monday evening, when he was about to enter his house, he found it on fire. He was alone at the time of incident. “Everything inside the house was completely destroyed by the fire, and I cannot explain the origin of the fire. I used to stay with my younger brother with his wife and we were left with no place to stay, other than staying with relatives,” said Munyai.

He said he and his girlfriend were now staying and sleeping in an old car, but he was worried that life might be dangerous as he could be attacked and killed because the old car’s doors were no longer working.

“Life is a nightmare because the tent that was supplied by the Vhembe District Municipality’s disaster management was blown away by heavy wind on Saturday night. I nearly lost my life, and I am pleading for help,” added Munyai.

Ms Suzan Ravuku of the Vhembe Youth Empowerment Programme, a non-governmental organization working around the Vuwani area, said after she had been informed of the incident, they had visited the family and they were currently applying to the disaster relief fund for Munyai.

His relative, Ms Sophy Mbedzi, said life was hard for Munyai since his house caught fire and it was very cold at night. “It is not safe for anyone to sleep in the old car because there might be snakes and rats inside the car. We will be pleased if someone, a good Samaritan, could help him get a better place to stay,” said Mbedzi. 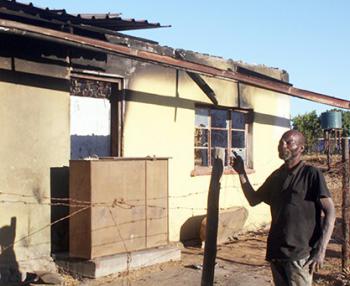 Mr Edward Munyai (58) points at the roof of his house, which was destroyed by fire.