The situation in Musina remains tense following yesterday’s violent clashes between residents and the police. The violent confrontation forms part of protest actions against water shortages and poor service delivery from the Vhembe District Municipality.

Several police Nyalas could be seen chasing protesters along the N1 yesterday, but residents fought back by throwing stones. The situation remained tense until late on Thursday evening. Although the situation was somewhat quieter this morning, there were sporadic incidents of violence flaring up again. Again, some roads in and around the town were blocked by protestors.

Several residents who spoke to the newspaper blamed the unrest on government’s decision to appoint the Vhembe District Municipality (VDM) as water authority.

“This was where everything got messed up. How can our water issues be run by authorities who are not residing in Musina,” said Jeffrey Magwira of Phase 9 Matswale.

Protesters turned to looting and vandalizing the municipality offices in Nancefield. Office windows were smashed and a municipal tractor was burnt.

A couple of metres from the Nancefield municipal offices, protesters looted a shop believed to be owned by an Indian trader. The newspaper visited the shop only to find it completely looted.

In response, the VDM issued a statement on Thursday that the water leaks that caused the water shortages were fixed and that the pumping of water had resumed. It was said that all areas would have had water by 13 May.

According to VDM spokesperson Mr Matodzi Ralushai, a contractor has been appointed to drill four additional boreholes to improve the water supply in Musina. This work, he said, would be completed in two weeks’ time.

Around noon on Friday, however, there were still reports of some areas being without water, sparking fears that the violence will flare up again.

Meanwhile, De Beers Venetia Mine released a media statement indicating that they are willing to work in partnership with the municipality to address water challenges facing Musina residents. The mining company indicated that they have already met with representatives of the Musina Municipality and the VDM.

In the meantime, many Musina residents have distanced themselves from the criminal activities that coincided with yesterday’s violent unrest. According to reports, several persons were injured after police fired rubber bullets. One man was supposedly found dead due to a gunshot wound, but it was not clear who shot him and where he was shot.

At the time of going to press, the Limpopo police had yet to respond to repeated requests for comment on the situation in Musina. 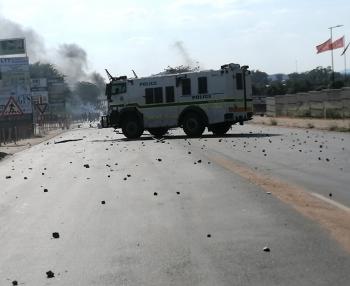 The N1 next to Musina mall resembled a battlefield on Thursday afternoon. Photo: Bernard Chiguvare