The ever-increasing crime at Maniini outside Thohoyandou has been blamed on the youth, most of whom are just roaming the streets with nothing to do.

This, however, could soon be a thing of the past, thanks to businessman Mr Mpho Nelwamondo, who is trying to get the youth back to the playing field.

The 29-year-old businessman, who owns the Thavhani Guest House at Maniini and IT and finance companies with offices in Thohoyandou and Polokwane, handed over a full kit to the fourth-placed Maniini Ravies FC, a local team campaigning in the Thulamela Football Association, at the weekend.

The donation came about after a community leader, Mr Eric Radzilani, approached him for assistance.

In handing over the full kit, Nelwamondo said businesspeople had a responsibility to help their communities, especially the youth. "As the business community, we can make a change in our communities. Crime is ravaging our communities. We can help change that by sponsoring the youth in sport, taking them from the streets and back to the playing field," he said.

He further indicated that, as a company, they were also financing youths who had business minds but did not have the finances to start up their businesses. “This is a way of ploughing back into the community and we will continue doing so as long as resources are available," Nelwamondo said.

Team manager Mulisa Ravele said he lacked words to thank their sponsor. “Youths with nothing to do face many temptations, most of the time ending up in prison. We are very excited as a team.” 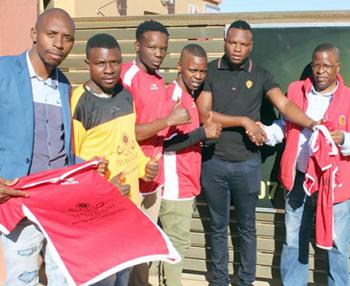