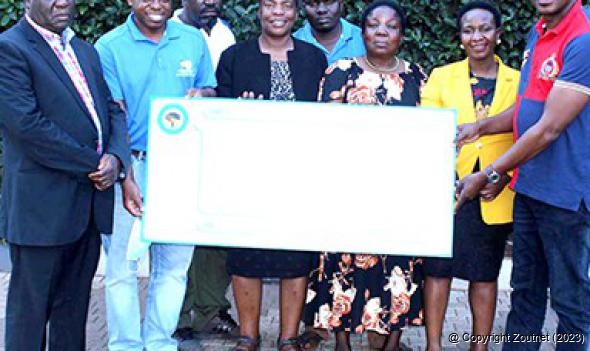 Although the teams affiliated with the Thulamela Local Football Association (Thulfa) have already been contesting in the Mpho Mathoho Electrical KO Competition over the past few weeks, the competition was only officially launched during a ceremony held at the 2 Ten Hotel in Sibasa last Wednesday.

The Thohoyandou Stadium will be the centre of attention on Saturday afternoon. This is where the much-awaited GladAfrica Championship League match between Venda Football Academy (VFA) and Tshakhuma Tsha Madzivhandila (TTM) will be staged. Whether VFA will have enough strength to stop TTM remains to be seen.

Local Paralympic star Sheryl James is truly shining at the Tokyo 2020 Summer Paralympic Games in Japan, just missing out on a podium place in the final of the 200m for T37 athletes earlier today.

TTM believe they have what it takes to win the league

Tshakhuma Tsha Madzivhandila (TTM) are still in celebratory mood. The team started the new season with a bang with a 3-1 victory over Cape Town All Stars at the Thohoyandou Stadium last Saturday. Vhadau Vha Damani, as they are affectionately called, are shining on top of the GladAfrica Championship League log after the victory.

All eyes on Sheryl this week

Lacoste Morning Stars on the road again this weekend

After collecting the maximum league points away from home last weekend, Lacoste Morning Stars will be on the road again this weekend. The Stars from Shayandima beat Botlokwa Ladies 2-0 in their Sasol Women’s League match at the Tshitungulwane grounds last Sunday. They will undertake a journey to Giyani on Sunday. Their match against Real Mighty Ladies will be played at the Xitlhelani Stadium.

After a break of two weeks, business as usual waits for the teams affiliated to the Limpopo Stream of the Sasol Women’s League this weekend. All eyes will be on the Vhembe derby between Lacoste Morning Stars and Botlokwa Ladies at the Tshitungulwane Grounds tomorrow. Apart from the fact that this is a derby fixture, Morning Stars and Botlokwa are close contenders for the league championship.

Black Leopards are ready for the new season

With the GladAfrica Championship League activities for the new season starting this weekend, Black Leopards have reason to believe that they have what it takes to gain promotion to the DStv Premiership Division, come end of the season.

Sheryl on her way to Tokyo 2020 Paralympics

On Saturday, 14 August, the South African Sports Confederation and Olympic Committee (SASCOC announced) its 34-athlete South African squad for the Tokyo 2020 Paralympic games, scheduled to take place from 24 August to 5 September in Tokyo, Japan. Louis Trichardt athlete Sheryl James is included in the team, which comprises a mix of experienced and emerging Para-sports talent.

The waiting is over. The opening matches for the GladAfrica Championship League Division will be played this weekend and the Thohoyandou Stadium will be the centre of attention on Saturday afternoon. That is where the much-awaited Limpopo derby between Black Leopards and Polokwane City will take place.

After disappearing from football circles about eight months ago, Mr Masala Mulaudzi has jumped onto the football bandwagon again. Mr Mulaudzi sent shockwaves through the country when he went public last Saturday, saying he had bought the GladAfrica Championship League franchise from Royal AM Football Club.

He has faithfully represented his country in countries such as Spain, France, Belgium, Eswatini, and Botswana and has scooped up several prizes, but many people in his village do not even know that he exists. Indeed, the saying that a prophet is not recognised in his own country is slowly unfolding for him. This is the sad story of unknown hero Phatuwani Mudimeli (27) of Matangari village outside Thohoyandou.

'Mr MC' to speak on behalf of Black Leopards

As a way to strengthen their communications and marketing department, Black Leopards Football Club recently appointed Mr Divhambele “Mr MC” Mbalavhali to the position of spokesperson for the club.

Annual Akkedis proves to be as tough as ever

The Soutpansberg once again played host to the gruelling Akkedis Mountain Bike races over distances of 15km, 38km and 70km respectively the past weekend.

Vondwe XI Bullets will be campaigning in the ABC Motsepe League when the league programme for the new season starts next month. They finished in the second position on the log standings during the SAB League provincial promotional playoff tournament that was staged at the Thohoyandou Stadium over the past weekend.

Local artists battle against the economic impact of Covid-19

We interviewed two Elim-based artists, Kulani Mabobo and Nebo SixFour, asking them how they cope with the economic impact of the Covid-19 pandemic.

In African cultures, snakes are generally associated with witchcraft – a fact that does not improve the already frayed relationship between mankind and reptiles. However, within a certain African community in Vleifontein lives a man who regards himself as the exception to this cultural belief. In fact, Denzel Ncube’s fondness for these slithering reptiles is no secret. Ncube gives back to his community by educating the local people on the dangers as well as the beauty of snakes and what to do when confronted with them.