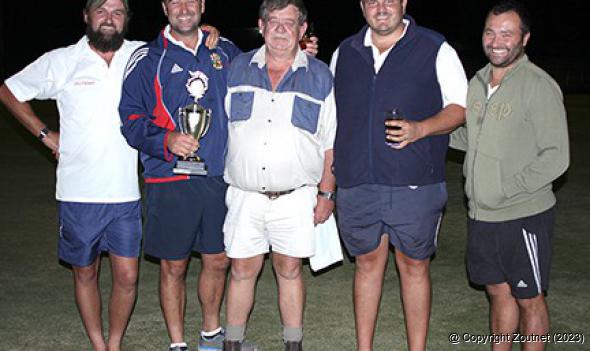 Mikhado and TRON in Vhembe derby

Teams affiliated with the Limpopo Stream of the ABC Motsepe League will commence with their second-round league activities this weekend. Whether Tshakhuma RO Nandilani (TRON) will have enough strength to stop Mikhado FC when they meet at the Louis Hoërskool grounds tomorrow afternoon remains to be seen.

The struggle for promotion and to escape relegation at the end of the season will continue among the teams affiliated to the GladAfrica Championship League this weekend.

Black Leopards must start to collect significant league points if they are serious about escaping the relegation axe at the end of the season. Their next fixture will be against Moroka Swallows, with whom they will lock horns at the Dobsonville Stadium in Johannesburg on Sunday afternoon.

After parting ways with Tshakhuma Tsha Madzivhandila FC about three months ago, Mr Joel “The Prophet” Masutha has secured a new coaching job at Pretoria Callies FC. Masutha was announced as the team’s head coach last Thursday morning, a day after the club terminated the job contract of the team’s former head coach, Mr Sammy Troughton.

Magau United will come up against Tshikhwani Stone Breakers, the league-title contenders in the SAFA Vhembe MMK Administrators League Stream E group E2, at the Tshikhwani Grounds on Saturday.

Teams affiliated with the Limpopo Stream of the ABC Motsepe League will be out of action this weekend. They will, however, return to the battlefield to complete their first-round league programme next Wednesday (7 April).

No truth in rumour about TTM’s head coach

Tshakhuma Tsha Madzivhandila’s head coach, Mr Dylan Kerr, has dismissed the rumour that he has parted ways with the club as baseless and unfounded. Mr Kerr was responding to reports by some of the national radio stations over the past weekend. According to the reports, Mr Kerr had refused to sign a job contract that Vhadau Vha Damani had offered him.

Another tricky hurdle for the struggling Black Leopards

The DStv Premiership teams will be back in action this weekend after a break of about two weeks.  Whether Black Leopards will have enough strength to stop Amazulu when they meet at the Thohoyandou Stadium on Sunday afternoon remains a million-dollar question. Amazulu are a force to be reckoned with, following the appointment of Mr Benny McCarthy as the team’s head coach about three months ago.

The waiting is over. The opening matches for the Sasol Women’s League in the Limpopo Stream will be played this weekend. All eyes will be on the match between Chippas United Ladies FC and Lacoste Morning Stars to be played at the Makhuvha Stadium tomorrow afternoon. Sparks always fly when Chippas and Morning Stars meet.

Will the Stars shine brightly over Sekhukhune United?

For the teams affiliated to the GladAfrica Championship League, this weekend will be business as usual. After donating significant league points to Steenberg United, to whom they lost 0-1 at the Ida’s valley Stadium outside Cape Town two weeks ago, Sekhukhune United are leaving no stone unturned in their preparations for their match against Cape Town All Stars.

Louis Trichardt managed a 71-run win over the Nashua Aces in their provincial Impala Cricket Premier League clash on Sunday, mainly because of Dewald Joubert’s impressive innings with the bat.

The struggle for promotion and to avoid relegation will continue among the teams affiliated to the Limpopo Stream of the ABC Motsepe League this weekend. Most of the teams will be playing their sixth matches of the season. The match not to be missed will be between Mikhado FC and Makotopong Brazilians at the Rabali Stadium tomorrow afternoon.

Sekhukhune United are still battling to come to terms with the result of their GladAfrica Championship League match against Steenberg United, which was played at the Ida’s Valley Stadium outside Cape Town last Saturday. They lost 0-1 to end their unbeaten record of four matches.

Black Leopards may have managed to grab a point from their DStv Premiership League match against Mamelodi Sundowns at the Loftus Stadium in Pretoria on Sunday evening, but the team’s future as an affiliate of the country’s elite league looks bleak. With the league programme for the current season gradually coming to an end, the team’s enthusiastic supporters have every reason to press the panic button.

It was again time for local cyclists to unbox the Christmas lights and decorate their bicycles as part of the annual Jingle Bell Toy Ride in Louis Trichardt that took part on Friday, 4 December.